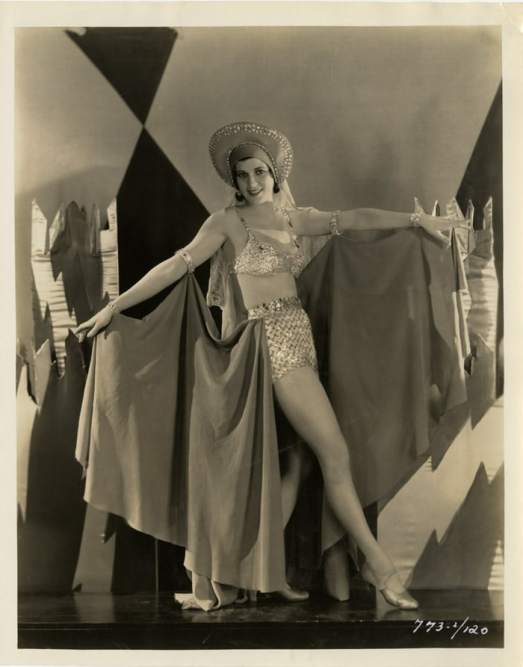 Prudence Sutton was one of many nice looking small town girls that crashed Hollywood hoping for at least a glimpse of fame. Unlike man others, she was noticed and given a starring role in a not inconsiderable feature. When the movie failed, she lasted for a few more years in Tinsel Town with no great success, and in the end traded it all for a stable family life. Let’s learn more about her.

Prudence Lovicia Sutton was born on April 24, 1907, in Sayre, Oklahoma, to Walter and Hattie Sutton. She had an older sister, Allie, born in 1904, and tow younger brothers, William Walter, born in 1909 and Tyson, born in 1911. Her father was a minister, her mother a housewife. The family lived in Beckham, Oklahoma in the 1910s.

Prudence attended Sayre high school and had a normal upbringing in a loving, tightly knit family. However, Prudence’s carefree teen years were abruptly cut short when her father was shot and slain by a cattle rustler not long after she graduated from high school in 1925. Her mother, a very resourceful woman, took the children and moved to Southern California. There Prudence got into movies in 1927. How exactly? Well, a bathing suit contest!

Prudence entered a Bathing’ Beauties most beautiful contestant. While she did not win, she and six other girls, Margaret Andrews, Evelyn Hunt, Caroline Burt, Josephine Hoffman, Harriet Mathews and Lorena Rhodes won cash, prizes, and, ultimately, a studio contract, and of she went!

Prudence made only two movies in her short career: Pitfalls of Passion, a silent movie from 1927, and Paramount on Parade, a sound feature from 1930. I usually don’t write much about silent movies since I am not well versed in them, but since Pru made only two, let’s concentrate a bit on them. Her first movie, Pitfalls of Passion, was supposed to be her jump of to fame, as it was her very first role and a leading role at that! Pru plays a demure and slightly bewildered country girl who runs off to the city with her lover. Then as the unfortunate victim of circumstances who is sold into moral bondage, and finally as the woman of the streets—beaten and forlorn.  The papers heralded Pru as a natural talent, noting that Miss Sutton gives a sterling performance that is startling because of its realism. It was quite an expensive movie to make – at one point, there were 800 people appearing in mob scenes. The movie is completely forgotten today, sadly.

Prudence’s second feature was Paramount on Parade, a pastiche of various stars singing and dancing. Forget about the story, about characters or anythign remotely deep – this is fun, pure and simple! As one reviewer from IMDB nicely sums it up:

When “Paramount on Parade” was filmed – Paramount had more musical stars than any other studio. The other studio revues (MGM’s “Hollywood Revue of 1929” and Warner’s “Show of Shows”) may have been more flashy but most of the stars were not singers or dancers and people went for the novelty of seeing their favourites trying to sing or dance.

There is little reason to see the movie today, unless one is a old musical buff, but there are worse movies one can watch!

That was it from Prudence!

Prudence had a very stable and peaceful love life – she married young businessman Joseph Bonadiman on April 11, 1931, in Los Angeles. Joseph E. Bonadiman was born on March 21, 1903, in California, to Carlo Bonadiman and Domenica Passarini, one of four children (he had a brother, Charles and two sisters, one of them Mary). His parents were both immigrants from northern Italy (which was under Austria-Hungary at that time). Prudence gave up her career in 1931 to marry and devote herself to family life.

The Bonadimans had a solid middle class family life. Their first son was born on Joseph Carlosutton was born on August 24, 1932 in Los Angeles, and their second son, William Walter, on June 21, 1935, also in Los Angeles. Joseph became a director of the San Bernardino Valley Municipal Water District and head of the civil engineering firm of Joseph E. Bonadiman & Associates, which was founded in 1942. His obituary nicely sums up his life’s work:

Engineer Joseph E. Bonadiman, who pioneered hillside developments from Hollywood Hills to San Bernardino, died of heart Tailure Monday at Redlands Community Hospital, his relatives said Tuesday. He was 86. “He was the first engineer to do hillside developments of any size in Los Angeles County,” recalled his elder son, Joseph C. Bonadiman. Chavez Ravine now home to the Los Angeles Dodgers was among the early projects. In San Bernardino’s steep foothills, he engineered developments near David Way and later throughout the Verdemont area. Although he had become less active during the last five years, he never fully retired. His last  day at work was Friday. The son of immigrant Austrians, Bonadiman came to California as a boy. He lived briefly on a 160-acre apple ranch in Apple Valley, where he arrived by wagon through Cajon Pass. He earned his engineering degree at UCLA where he once sold a used tuxedo to classmate John Wayne. “My dad needed some money and Duke Morrison John Wayne needed a tuxedo, so they traded,” his son said. Working as an engineer in a largely undeveloped state, Bonadiman found himself helping to build bridges, dams, subdivisions and a few airfields. “He designed Ontario International . . . Hawthorne . . . and a couple I don’t remember,” said his son.

In 1960 the family moved from Los Angeles to San Bernardino where the engineering firm had already developed extensive
business connections. The Bonadimans nicely blended with the locals, and soon became a well known town staple couple, and Prudence was very active in the local catholic church and various charities.

In early 1966, Prudence had been taken ill. She had been hospitalized for more than a week and was apparently holding her own when an embolism, or blood clot, in the lung resulted in death on January 10, 1966. She was buried in San Bernardino.