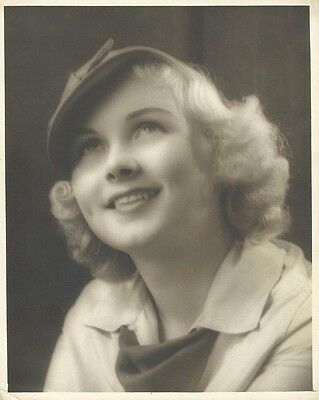 Mildred Rehn was a cute chorus girl who danced in Busby Berkeley musicals before getting married, taking a hiatus, then trying, briefly, for a second career some ten years later. She fared only a bit better, did some writing and ultimately retired form the screen.

Mildred Anna Elsie Rehn was born on July 24, 1913, in Vancouver, Canada to Mr,. and Mrs. Rehn, nee Auerbach, both Austrian immigrants. Little is known about her childhood, except that she immigrated to Washington with her parents in the 1920s. Ultimately the family settled in Michigan, where Mildred attended school. After graduation, she started dancing professionally as a chorus girl.

At only 20, Mildred dancing her way around the world and had already visited London, Paris, Berlin, Vienna, Budapest and Italy and different cities the US. After dancing engagements, she was studying dramatics and art and developed a desire to become a tragedienne. “I’m still studying and hoping for a chance to prove my ability,” she would later say to the papers.

She wanted to see the Hollywood and managed to secure a job as one of Busby Berkeley’s dancing girls In “Gold Diggers of 1938” at Warner Brothers so she could stay awhile and this is how her career started!

Mildred Rehn, under her birth name, made only one movie – Broadway Melody of 1938, a typical Busby Berkeley musical extravaganza, with a whole lot of pretty girls, a major lack of decent clothing, with a transparent story and even some horse racing elements. Allegedly Mildred appeared in a string of Berkeley production, but she is not listed as such on the IMDB, so anything goes.

Mildred had a second career as Helga Storme – her credits were the Gus and Dick comedy duo short, Hot Water, and the Ingrid Bergman/Charles Boyer Arch of Triumph, a movie Illegal refugees lead dark lives in pre-World War II Paris. It’s a dark, moody, heavy movie, with brilliant chiaroscuro cinematography and incredible closeups of the always luminous Bergman, but certainly not for everyone and it’s not an easy movie to follow. There is a deliberate lack of a clear narrative outline, and everything just flows, literary like darkness, around the screen. Interesting movie, and a one worth seeing for sure!

David Ragan’s book Who’s who in Hollywood claims that Mildred, as Helga Storme, wrote at least one film – the french movie Francesca. I could not find any more credits nor could I find the movie in question, but it is possible that Millie took the writing mantle and achieved a minor success in it.

And that’s it from Mildred!

Due to her parents being Austrian, Mildred was often called a Viennese actress, although I could not quite confirm that they were indeed from Vienna and not some other Austrian city. It seems that she never lived in the city and only visited in a few times, so calling her a Viennese actress is a bit of a stretch – she is a Canadian actress first and foremost.

While in Hollywood, the camera was good to Mildred and she was called to the front office and offered a contract to be groomed for better things. She flatly turned down the chance which would have been snapped up by thousands of girls. She asserted her travels have only started and that as soon as she pays a visit home she will head for Cairo. Then she’s going to write a book on her experiences. Unfortunately, the book was never published, but let’s hope that Mildred traveled around and saw many, many nice things! 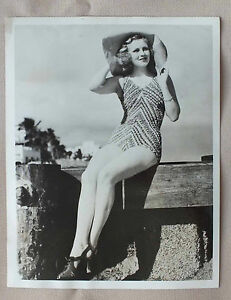 Millie’s one big claim to fame was not the movie, but rather being a top chorus girl. Namely, she was announced by Dave Gould, film dance director, as meeting his standard for the ideal chorus girl of 1937. She was a blonde and 5 feet 6 inches tall. Gould said to the papers that the trend toward period costumes for chorus girls instead of nudeness requires taller girls with more poise and elegance. She was in almost any paper in country you can imagine, and gained a small momentum of fame.

Within two weeks after Mildred was picked as the “perfect chorus girl”, she received more than fifteen marriage proposals! I always have to chuckle at this – how much of a crush do you have to have on somebody to ask him to marry you based solely on a photo? Funny!

Here is a another article about Mildred from that period:

Mildred Rehn is a wise woman who as a model, cosmetician, showgirl, dancer and actress has been pretty much all over the world, has had a lot of rich experiences and wants some day to write about them. “Life is not so hard,” she says. “Of course I am tired when I leave the studio, but I am too tired and nervous to sleep. So it is just as well that I go to dinner with some Hollywood man who will sit and talk about what a great man he is and how he is going to make a million dollars. This talk bores me so much that I get very sleepy, so I go home then and sleep fine.’

As for her love life, Mildred was quite low key and lucky in this regard. She started dating Stanley Cortez, film studio cameraman and brother of actor Ricardo Cortez. After some months of dating, they were married secretly in Tijuana, Mexico.

For their second marriage ceremony, the happy couple went to Las Vegas for two days, 18 months after getting married in Tijuana. Here is Cortez’s IMDB profile, which more or less says a great deal about his life and career:

Stanley Cortez was born Samuel Krantz in New York City, New York, the son of Sarah (Lefkowitz) and Moses/Morris Krantz, Austrian Jewish immigrants. His famous actor brother, born Jacob Krantz, changed his name to Ricardo Cortez in order to acquire a more suitably romantic Hollywood image. Stanley changed his name accordingly. After studies at New York University he embarked on a photographic career, first as assistant to noted portrait photographers Streichan and Bachrach (he designed many of their lavish background sets), then as camera assistant for Pathé Revue and for various Manhattan-based film companies. Grabbing the chance to join Gloria SwansonProductions, Stanley then spent a lengthy apprenticeship in the 1920s and early 1930s learning the intricacies of his craft from such established Hollywood cinematographers as Lee Garmes and Hal Mohr. After moving from studio to studio, either as a camera assistant or shooting screen tests, he was signed to a seven-year contract by Universal in 1936, albeit consigned to its “B” unit. His first film as full director of photography was Four Days Wonder (1936). During World War II, he was assigned to the Army Pictorial Service of the Signals Corps.

Much of his subsequent career was spent on fairly routine and undistinguished second features and it was not until he started working for charismatic filmmakers like Orson Welles and David O. Selznick that he was able to fully develop some of his experimental techniques. One of his low-budget outings, a gothic old-dark-house horror/comedy entitled The Black Cat (1941), rather impressed the genial Mr. Welles who promptly hired him for The Magnificent Ambersons (1942). This was the first of two Cortez films generally regarded as visual masterpieces, with beautiful lighting effects, clever angles and lingering close-ups. Of particular note are the staircase scene and the famous long shot — via hand-held camera — of the abandoned mansion. Despite critical plaudits, “Ambersons” was a financial disaster for RKO (it cost $1,1 million and lost $624,000 at the box office) and Cortez was partly blamed for costly delays and extravagant scenes, some 40-50 minutes of which were cut by direct orders from studio boss George Schaefer without consulting either Welles or Cortez. The latter ended up being indirectly censured by receiving lesser assignments. What remained of “Ambersons” has become more appreciated as a sublime visual experience with the passing of time.

The second outstanding Cortez contribution was the chillingly dark, haunting thriller The Night of the Hunter (1955)–a brilliant allegory of good versus evil masterminded by Charles Laughton in his sole directorial effort. Cortez’s lighting and use of irises are reminiscent of German expressionist cinema, or, at least, the work of Karl Struss and Charles Rosher on Sunrise (1927). Among many indelible images are the flowing hair of drowned Shelley Winters in the underwater current and the lights flickering across the water in what is an almost surreal nightly landscape.

A third Cortez effort deserving of mention is the superior psychological drama The Three Faces of Eve (1957), his differential lighting for the face of schizophrenic Eve White (Joanne Woodward) effectively contrasting the multiple personalities within her psyche. Sadly, by the end of the decade Cortez’s career went into a decline. It continued that way through the 1960s, the quality of his assignments fluctuating wildly between the occasional “A” picture (The Bridge at Remagen (1969)) and Z-grade turkeys like The Ghost in the Invisible Bikini (1966) and The Navy vs. the Night Monsters (1966).

Mildred gave up her career for a time so she was follow her husband on location and be the support he needed. Here are some snippets about the Cortez’s marriage and life:

Stanley Cortez, a director of photography in Hollywood, said in an interview here Tuesday night that the Canadian climate may have something to do with the success of Canadian screen stars. After sniffing the cold, clear air on leaving his train Mr. Cortez said the atmosphere In Canada ac counted for the fact that such stars as Norma Shearer, Deanna Durbin and Mary Pickford “seem to have so much more pep” than others in Hollywood. The director Is accompanied by, his wife, the former Mildred Rehn of Vancouver.

And the second one, very interesting, about the relationship between cinematographer and actress:

Maybe one reason TV hasn’t spawned any great female stars is because there is no great rapport between a woman and her cameraman. Stanley Cortez, a governor of the prestigious American Society of Cinematographers, says that, in movies, there always was a relationship between the great women stars and their cameramen. Such a relationship does not exist in TV. “That’s probably because TV companies are always trying to complete their shows as quickly as possible,” Cortez says. And, of course, in movies with the big screen, you have to pay close attention to close-ups and to the glamour of the leading lady.” Cortez says that the rapport between movie queens and their cameramen was so close that several pairs even got married. He cites these examples: Jean Harlow married Hal Rosson; Joan Blondell married George Barnes; both Linda Darnell and Lina Basquette married Peverell Marley at one time or another; Merle Oberon married Lucien Ballard; and Cortez himself a Viennese actress, Helga Storme. “The relationship between cinematographer and leading lady,” Cortez says, “is much like that of doctor and patient. She has to rely on him far so many things her whole career may be in the hands of the cameraman. “And a responsible cameraman feels that responsibility very strongly he must make he look best so she comes across on the screen.”

Stanley and Mildred had no children, but enjoyed a happy and fulfilling marriage, a kind of rarity in Tinsel Town. They lived in Hollywood, where Stanley worked until his retirement in the 1980s.