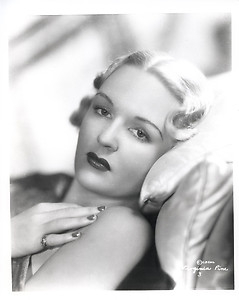 The elegant society lady made little impact on Hollywood on her own, but was a large influence on one of Tinsel Town’s biggest stars of the 1930s and 1940s, George Raft. Without a doubt, Raft would not be George Raft we all known today without her, and as a result, his immense influence on several great directors would never have been the same.

Virginia Pine was born as Virginia Marie Peine in Chicago, Illinois, on August 11, 1912 to Adolph Peine and his wife, Mabel Rees, married in 1903. She had an older brother, Jack Peine. Her family was solidly upper middle class, and Virginia grew up in an affluent, secure environment, mingling with the Chicago high society. She was educated in private schools.

Virginia got to Hollywood in late 1933 and right away was signed by Fox. However, during filming, she refused to appear in a scantly clad costume and lost the contract. Her only appearance is in the early and sadly forgotten Spencer Tracy film, Bottoms Up. The movie has much to recommend itself, not just Tracy as a likable hero-villain, but a strong supporting cast including John Boles and some seriously snappy dialogue.

Virginia was signed by Warner Brothers in March 1934. Her stint with the studio lasted for a year and produced four appearances in movies. Her first try was Doctor Monica, a Kay Francis vehicle. And rarely has Hollywood made a movie about a shockingly relevant subject in a such a melodramatic, soap-operish way. Everything that happens in the movie was possible in reality back then and is even now, but of course we have simplistic characters that are morally either superior and mentally strong (Kay Francis), whinny and irresponsible (Jean Muir),  or caddish, slightly negative (Warren William) . All perfectly plausible people in real life, but much too straightforward. Yet, the cast is excellent and did their job well. Virginia played Monica’a friends and is briefly on the screen.

Virginia than had roles in two completely forgotten comedies, a small one in Fugitive Lady and the lead in Hot Off the Press. No info is given about the movies, and we can assume they have been forgotten for a reason. Her only other credit from this time is The Whole Town’s Talking, a top notch Jean Arthur/Edward G. Robinson comedy.

From then on, Virginia only acted sporadically, appearing in one of the best movies of Hollywood’s golden year, 1939, The Women. It would take another five years for her to make her last movie, Boogie-Woogie Dream in 1944. The charming short showcases Lena Horne at her best.

Virginia went to the Broadway stage to continue her acting days. She was featured in Heart of a City and Lady in the Dark before marrying in 1942 and leaving it all behind.

Virginia married for the first time when she was about 17, to William I. Watbel, an athlete, and divorced him in February 1931. Her second husband was the wealthy department store heir, Edward John Lehmann, 10 years her senior, whom she wed in late in 1931 in Boone, Illinois. Her daughter Joan Lehmann was born in 1933 in Chicago. They separated soon after the birth.

Now, the stories of how Raft and Virginia met differ. One source claims that he visited Chicago and met Virginia. She fell madly in love with him, left her husband and followed him to Hollywood. The version that sounds more accurate is that Virginia was a friend of Jock Whitney, a notorious millionaire playboy, who introduced George to her. Beautiful, fair skinned and blonde, Virginia was the Botticelli Venus for Raft – and her cool, sophisticated manner and was a direct contrast to his own frugal upbringing and the more crude, less polished women he usually dated. Virginia fiddled with Raft on their first date, driving the well heeled womanizer to dust. Later she claimed she did or the fun and to humble him – in other words, Virginia was a woman who knew what she wanted, knew how to play and play well she did. George fell fast and hard.

Virginia and George dated for the next seven years, from 1933 up until 1939/1940. It was his most meaningful, sincere and earnest relationship. She completely changed his image from a badly over-dressed hoodlum from Hell’s Kitchen to a slick, alluring gentleman who always had that whiff of danger within him. The Pygmalion scheme (in reverse to the usual older man/younger girl scenario as she was both younger and a woman) included dressing him, teaching him the social graces, proper way to eat and drink, how to talk, what to talk about and so on. It really rubbed off him, and George became the man today known – one of the best Warner Bros stars in the 1930s, standing hip to hip with James Cagney and Humphrey Bogart.

George built a palatial house in Coldwater Canyon where Virginia and her daughter Joan lived. They went for holidays on Catalina island, attended the horse shows at Santa Anita racetrack, and were an all around acknowledged Hollywood couple. George himself was a perfume connoisseur and bough Virginia a big number of rare and expensive perfumes from abroad she would cleverly use to further enchant him. He was also a terrific father figure to her daughter, Joan, who was just a baby when the two started dating. In many ways, George WAS Joan’s father, as she spent her formative years (from ages of 1 to 7) with him and trusted him completely. In return, George adored the girl and enjoyed taking her to the park and doing other paternal activities.

As with most real life stories that sound like fairy tales, there is a catch, and not a small one. George was still technically a married man. His wife, Grace Mulrooney, lived in New York, as they had been separated for a long time, but she was a Catholic and refused to give him an divorce. She was paid handsomely by getting 10% of everything George made in Hollywood. As most women living in the 1930s, Virginia opted for marriage and wanted to wed George after it was clear they were suited to each other, but this was one thing George could not give her. Soon, all the money, fame and social status became meaningless in the shadow of living as an unwed couple. Yet, George could not or did not want to get an divorce, no matter how much Virginia pushed him. 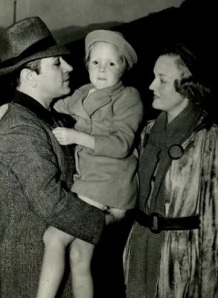 Then, the inevitable happened – Virginia started to date other guys. This was a huge blow to Rafts ego, and he was so jealous he sometimes stalked Virginia and her escort-of-the-hour to the nightspots. One especially nasty example of this was when Virginia dated Joseph Schneck, the powerful and wealthy movie mogul. Raft followed them to Schneck’s house, rang the bell and when no one opened the door,broke it down, entered, saw Virginia and Schneck on the couch, just glared at them, turned and left.

From there the relationship went downhill mighty fast. Virginia started avoiding Raft, and when they were together, they fought constantly. Soon he decided to end the misery, giving her 15 000$, which she used to move to New York in 1940. He moved to her Coldwater Canyon house with his best friend, Mack Grey. Raft himself admitted that the end of their affair was a great blow to him, and how Virginia was the love of his life. In his biography, Raft constantly blames his wife for not giving him a divorce, but several other sources claim he was too cheap to divorce Grace since he knew she would take too much money. Whatever the truth, the fact remains, Raft and Virginia did not end up married and it was a huge burden for the rest of their lives.

Virginia married war correspondent, Quentin Reynolds, on March 26, 1942 in a civil ceremony. She became a Catholic to be able to have a church wedding. They enjoyed a hefty social life in New York and could often be found in the newspaper social column. According to Wikipedia, in 1953 a scandal with Reynolds in the middle happened:

In 1953, Reynolds was the victim of a major literary hoax when he published The Man Who Wouldn’t Talk, the supposedly true story of a Canadian war hero, George Dupre, who claimed to have been captured and tortured by German soldiers. When the hoax was exposed, Bennett Cerf, of Random House, Reynolds’s publisher, reclassified the book as fictio

She and Reynolds divorced in 1960, and the next year Virginia married Byron Foy, a wealthy New Yorker and vice-president of Chrysler whose late wife Thelma Foy was, for ages, on the international best dressed lists. Foy died in 1970.